Based on the nanocrystallization of active ingredients, nano hydroxysome transdermal delivery technology uses calcium phosphate hydroxysomes as carriers to release and absorb nutrient components that different skin layers need at fixed points, according to different PH Values in these layers, in order to solve all kinds of skin problems in a targeted way.

Infuse treshalose, green tea and other natural ingredients into the skin for anti-inflammatory and sterilization, and balance water and oil, to make your skin tight and vital. This toner can keep the skin moist as long as 8 -12 hours. It is suitable for all skin types, including dry and sensitive skin. It is alcohol-free. The special scent comes from the extracts of all-natural plants.

The current situation of the Chinese beauty and cosmetics industry is in a mess. First, there is no complete policy or rules to supervise this industry; second, media have done too many negative reports on beauty industry in China, and have made negative influence as well; last, most people who work in this industry do not have high education, and it leads to distrust from customers.

As the world is going to globalization, the chinese beauty industry is changing. Since the government starts to pay more attention to it, customers becomes more rational, more foreign brands come to China. The industry is forced to make difference, developing in a high-end, professional and international way.

So how to make the difference? Firstly, companis have to change the way they do business. They need to focus on solving customers’ skin problems, but not just thinking about making money; secondly, the products’ structure has to be altered. Customers do not have a lot of patience to choose products; instead, they like simple and convenient products; lastly, products should be more personalized as well as humanized.

March to the Chinese market

In 2008, Virgo officially entered the Chinese market, and set up the Virgo China management center in Shanghai.

By 2004, Miao was already a burgeoning businessman in the US. He also has a strong sense of social responsibility and compassion.

He made outstanding contributions to help victims of 9-11, and he was invited by the President of the United States George W. Bush to attend the Summit of America’s Business Leaders. There he met the most important person in his career – professor Avram Hershko, a Nobel laureate in chemistry.

Hershko told Miao that he owned the patent rights for medically proven nano hydroxysome transdermal delivery technology. If it could be used in cosmetics, it would possibly be a breakthrough in the industry.

Miao was excited about the technology and thought it might be a great opportunity for him to make something happen.

Two months later, he returned to China. He attended a cosmetics expo in Guangzhou with a friend who ran a salon in the US.

“I told him that was why I can do something here. There’s an opportunity.”

When Miao returned to the US, he took over a factory in New Jersey founded in 1967 for research in biotechnology and cosmetics. He named his new company “Virgo” for the horoscope sign denoting a personality seeking perfection. Then he asked Hershko to be a shareholder by offering his patented technology.

Kevin Miao, why does he deserve Chinese people’s respect?

Miao started to build Virgo as a brand in 2004 headquartered in the US. Four years later he brought it to China and set up an office in Shanghai.

When asked how Virgo could compete with big names like Dior and Chanel, Miao answered it was technology and service that made the brand stand out.

“That’s how I position Virgo – ‘cosmeceuticals’ with technology from a Nobel laureate – along with a whole set of professional services and specific distribution channels like fancy salons and spa clubs.”

Miao said cosmeceuticals – those with potential health benefits – are now a big hit in the industry.

As well, the cosmetics industry in China was not well regulated, lacking high-quality services and professional practitioners.So he decided to offer cosmeceuticals with more advanced technology. He also asked for tighter regulation that made products more accountable to customers.

Miao trained practitioners in every distribution channel but needed to be creative. He said many of the local makeup doers were not well educated, so reciting

regulations and manners to them could be useless. Instead, Miao used debates and mock court trials to help beauticians remember regulations and master the proper way to communicate with customers.

“It was very effective. One day a manager of a local salon came to thank me because after the debate he could communicate with customers very confidently,” he said. Miao is a dreamer, but he is also flexible. When he first came to Shanghai with his Western way of doing things, he encountered difficulties and failures. Soon he changed to fit in by hiring a local team but still used Western ways to run the company.

He said there were a lot of temptations and distractions on the way toward his dream. People contacted him trying to buy the rights as the agent for Virgo in China. Some advised him to move the factory to China for its cheaper labor and resources. But Miao refused.

“If I were going to maximize the profits, I might ruin the image of my brand, which is counter the dream I have held for so long – to build a Chinese-owned cosmetic brand that could dominate the global market.”

The Virgo Group US was established in New York in 1967 by Kevin Miao, who was named by Fortune Magazine as one of the 100 most influential people in the United States among small & medium ($1 billion) businesses in 2004.

It operates businesses in more than 50 countries and regions around the world. The group has received the United States FDA pharmaceutical and cosmetic production license.

Kevin Miao has always had a vision for the development of the beauty industry. In fact, Virgo has fostered a revolution in the cosmetic industry by offering people the most advanced technology and finest aesthetics available in the East and West.

The name Virgo has come to represent the highest standards in quality. Virgo has core technology that is far above the industry. Its powerful R&D team consists of chemists with medical backgrounds who have achieved numerous patents.

Virgo brings together the world’s most influential talents in the biochemical field, including a Nobel Prize winner in chemistry. It also boasts four patents that cover the most evolutionary breakthroughs in the cosmetics industry. The patents include: a global patent for nano hydroxysome transdermal delivery technology that resolves absorption problems, PLA high-collagen technology, and PLA polypeptide.

Kevin Miao hopes to build a Chinese-owned world-renowned luxury brand with cultural charm, similar to Chanel and Louis Vuitton. Kevin Miao is creating the future in the beauty industry by offering a creative vision, cutting edge technology and excellent quality. Virgo is proving to be a timeless legend.

Value-added services in beauty industry is reaching out for precision

Since September 2012, America’s high-end cosmeceutical brand Virgo has started its educational training month, which has conveyed deep value to the development of the industry.

According to Jiang Jiquan, the greater China educational training manager, in this month, the courses for our beauticians are mainly on learning about workplace and sales services. Sales psychology, business performance and clients’ networking are also involved. We invite senior managers from five-star SPAs, expecting to learn about how to satisfy needs from different groups from levels. “The only standard we have for this activity is to have actual effect for our business,” Jiang said. 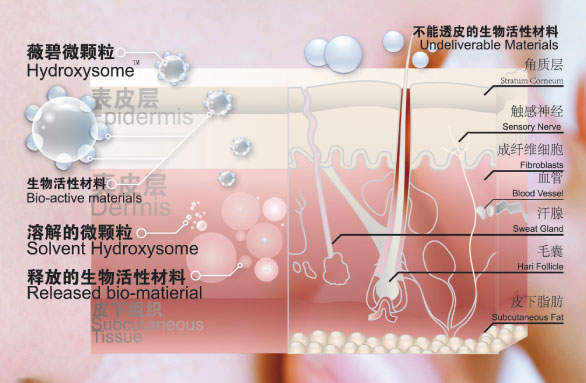 Based on the nanocrystallization of active ingredients, nano hydroxysome transdermal delivery technology uses calcium phosphate hydroxysomes as carriers to release and absorb nutrient components that different skin layers need at fixed points, according to different pH Values in these layers, in order to solve all kinds of skin problems in a targeted way.